To create a reliable patrolling system, groups of robots are used; to organize their interaction with each other, multi-agent solutions are used. It’s recommended to estimate the number of patrolling robots with redundancy in mind.

System from a group of security robots

Security robots used to ensure safety for facilities and their premises need to perform this job continuously. Along with that, robots need to be charged, repaired, and serviced; conflicts are also possible if robots are unable to travel along their patrol routes. To create a reliable patrolling system, groups of robots are used; to organize their interaction with each other, multi-agent solutions are used. In a system consisting of a group of security robots, each robot acts as an intelligent agent that has its own purpose and objectives. All of them have wireless communication equipment to share information with other robots, and can inform each other about their current condition and intentions.

How many robots it is necessary?

It’s recommended to estimate the number of patrolling robots with redundancy in mind. This will release resources such as endurance distance and off-duty time, free of patrol in the assigned area. The automatic redistribution of free resources among robots ensures the reliability and continuity of the patrolling process. For example, one of the robots can take place of its neighbor if the latter one needs recharging and has to leave its route. This interaction creates a self-organizing system that is capable of reacting to external circumstances without the need for programming every response.

GET A SPECIAL OFFER FOR PROTECTION BY 20 ROBOTS AND MORE 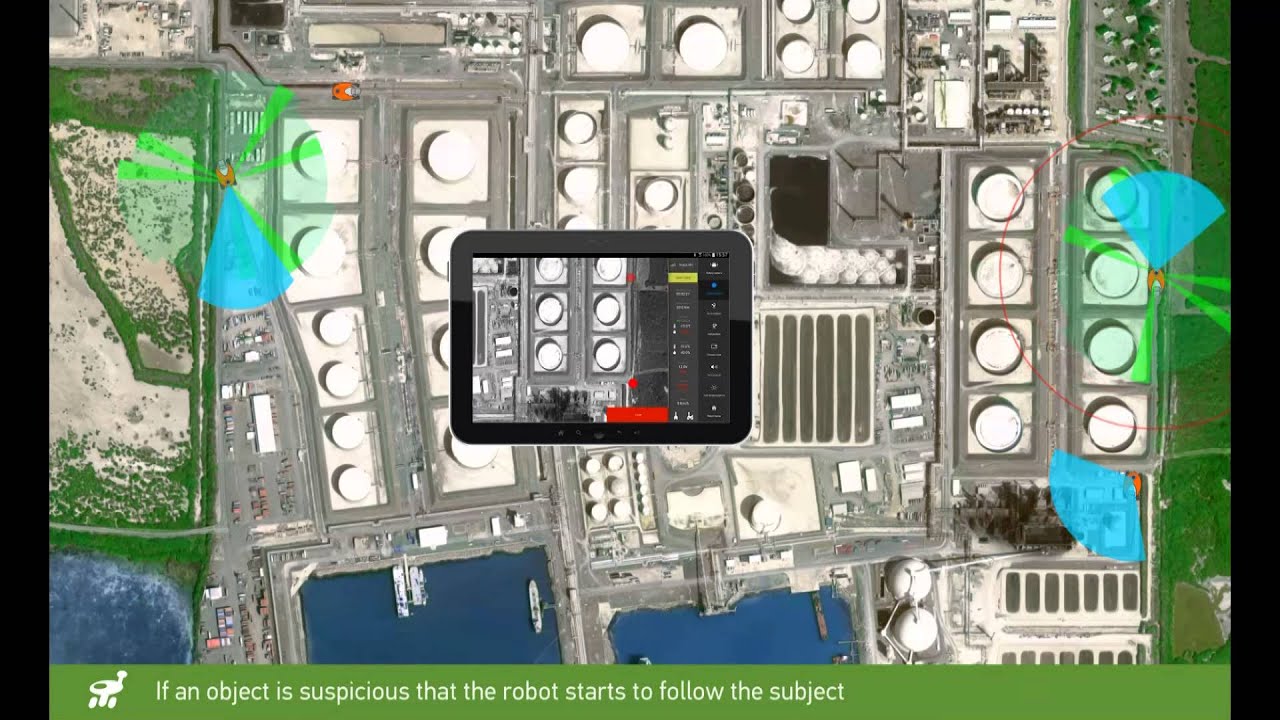 One of the main objectives for a group of robots patrolling the premises is to make sure that the area is evenly covered by surveillance, and to preclude situations where part of it is not surveyed. However, if a robot does not move over a long period of time, this reveals its position, and makes it easier for an intruder to covertly infiltrate the premises. That is why it is advisable to survey the same area from different observation points. This objective can be achieved by having the robots move in an interdependent fashion. Two robots located next to each other provide surveillance for one area of the premises, and take turns examining it from different perspectives.

Continuity for patrolling might be disrupted as the result of one, or several, robots getting excluded from the patrolling process. There are some predictable reasons for this, like the need of recharging, or unpredictable ones, like an insurmountable obstacle appearing in a robot’s path of movement. In this case, the task of the robots that are still functioning is reassigned to ensure safety for the area of the premises that was patrolled by the inoperative robot.

This objective is achieved through multi-agent interaction between the robots where each of them can independently adjust its current task to resolve the larger, overriding one. It must be noted that solving such issues requires a certain resource redundancy in the mobile robot system. If the number of robots or amount of resources for the patrolling routes supports only the local task of the robot (that is, patrolling a certain area), then priorities must be set for the areas being patrolled in conditions when the resources for the security robot multi-agent system are limited.

At this stage, a feature that will allow setting the priorities for the patrolling areas is under development. The main goal for this work is getting the opportunity to set the priority for an area of the premises through analyzing the big data received as the result of robot operation.

One of the conditions for the successful functioning of the security robot multi-agent system is the existence of wireless communication channels between them. Moreover, for the video surveillance system to work efficiently, video streams and warning messages with photo or video fragments must be sent to the company’s security dispatch office. Deploying MESH networks between the robots help accomplish these tasks. 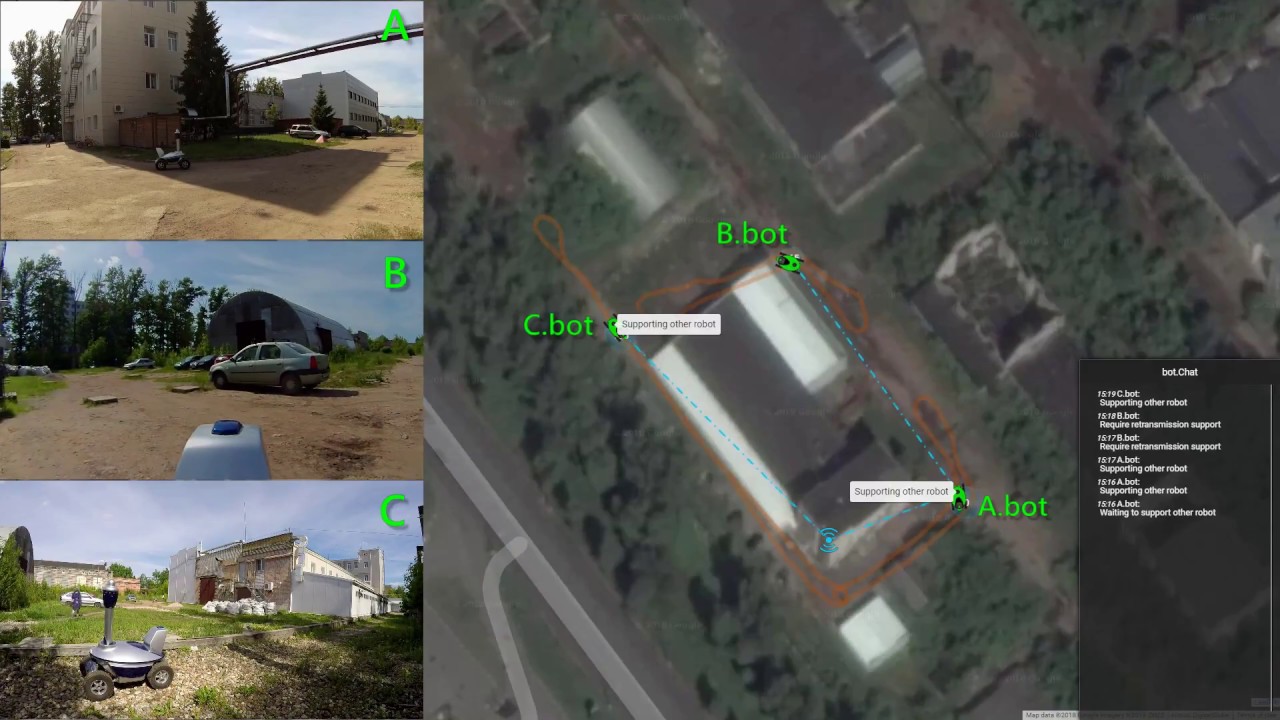 All the robots can exchange data via 4G and Wi-Fi. To reduce the amount of 4G traffic, Wi-Fi routers can work in MESH and Ad-Hoc modes. These modes support relaying data from one robot through other robots to a base station. In case of a high-density development or a large amount of vegetation, it is advisable to use additional separate robots that serve as radio signal repeaters. In case it is preferable to use 4G only, there is a place inside the robot to install an additional router provided by the local cellular operator.

The Number of Robots Needed for Swarm Intelligence Patrolling

The number of robots necessary and sufficient to ensure reliable security is determined by the characteristics of the facility being guarded. An online calculator for patrolling and surveillance time will help you evaluate the number of security robots needed. This simple service is based on Google Maps and permits drawing out the patrolling routes and surveillance positions for the security robots at the facility. The program calculates how much time is needed for the robots to move, and how many of them are left for surveillance in stationary positions. Depending on the result, you can increase or decrease the number of virtually deployed robots.

Swarm intelligence, an intrinsic part of the robotics security team, allows large-scale facilities with complicated topography or high-density development to be guarded reliably. Swarm behavior supports the work of up to 100 robots at the same time. This number provides for reliable security of very large facilities.

Our company is interested in installing robots to address surveillance challenges at large-scale facilities, where the conditions are complicated. Our specialists will perform the installation work and will provide support during the test period. Where necessary, we will develop additional software modules that take into account the characteristics of a particular facility.

Estimate efficiency of the security robots today. Check out our new service of virtual robot deployment. Create a patrolling route for your facility using Google Maps. We’ll estimate how many robots are required for your high security.

We are open to cooperation with companies that provide security for large-scale facilities. We believe that our robots can maintain a high level of security while reducing the costs.

The aspects of swarm technology for security patrolling

to the patrolling routes to ensure that the guarded areas are evenly and consecutively surveyed from different observation points.

Reassigning the patrolling routes among the robots

for an uninterrupted surveillance of the entire premises when a robot leaves to be recharged, or for maintenance.

when obstacles arise using an additional repeater robot that is placed automatically between the security robot and the base station.